Dingus’ Big Data-based smart business platform, DataHotel, is developing a new indicator to show customer search ‘trends’. The intention is to make the map of preferences available to hotels at all times, thanks to the fact that DataHotel analyses more than 1 billion search preferences per month. Etoolinnovation has provided the March test, in which Mallorca is at the top of the searches (23.6%), followed by Tenerife (10.8%) and Punta Cana, with 7.2%. Taking into account hotel availability and the different decisions regarding openings, closures, restrictions and various limitations, the Costa Dorada, Gran Canaria, Lanzarote, Riviera Maya, Costa Blanca and Costa del Sol, show a decreasing interest from 6.6% to 3.9%.

Couples and from July onwards

The range of booking intentions is mostly in the next 5 to 12 months (32.9%), so that from July onwards is the horizon for this percentage of searches. Another 24.7% of users intend to travel in the next two months. The preferred stay is short, from one to four days for 48.1% and one week for 34.6%.

The most striking of the data recorded in this developing indicator refers to the type of client: 83.2% of couples are currently looking for accommodation in a double room.

This new DataHotel dashboard will also work on the type of establishment most in demand in the intention to book, and which in the March analysis corresponds in 57.1% of cases to a four-star hotel. The five-star hotel is the preferred option for another 21%, and the three-star hotel is chosen by 11.9% of those interested. 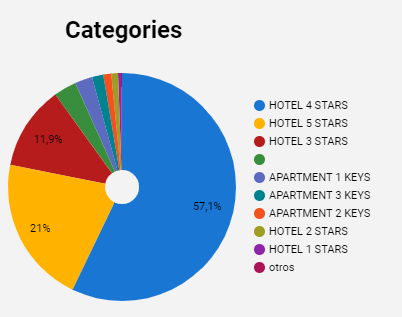 Beyond the trends observed in searches, the sales indicators of our data processing tool show that in the Balearic Islands, where we currently count 264 hotels connected to Dingus with active bookings, and following the announcement of opening to international tourism, room nights tripled in the archipelago and grew by 221.6% (exceeding 154,000), with Menorca as the island where roomnights increased the most (277%). Overall bookings were 205.6% (+24,300) above those of previous days in mid-March. But soon after, the trend began to deflate, with total sales figures falling below even those recorded at the beginning of the month.

On the 24th, following the German requirement for their nationals to present a PCR when returning from their trips, a halt in bookings was confirmed, but not a significant increase in cancellations over the last ten days, which were around 22%. This was reported in the publication Hosteltur, echoing the DataHotel information consulted.

Regarding the most booked, and in a very similar line to that detected in the search trends, the main stays are sold by four-star hotels, on a half board basis, for couples and with a duration of 5 to 7 days. In almost 30% of the cases it is for bookings from the end of summer onwards, but in another 27% they are foreseen imminently and in 20.4% during the next 2-4 months.

Do you want to be up to date with our news?